You can read part one here: https://lagaleriamag.com/titeres-del-caribe-debunking-the-myth-of-dominican-independence/

1916 was a hot year in world politics. Northern empires couldn’t agree on how much of the world to dominate. Ayiti/Quisqueya was caught in the cross-fire when the U.S. scapegoated Germany and invaded Haiti in 1915 and the Dominican Republic in 1916.

As the U.S. imposed military control of the Dominican Republic, the political situation was still unstable — or rather, unallied with U.S. colonial interests. When Dominican president Francisco Henriquez refused to obey U.S. president Woodrow Wilson’s desire to control the country, Wilson invoked the treaty that the U.S. forced onto the Dominican Republic in 1907, and installed a U.S. navy captain as the country’s military governor on November 29, 1916.

To maintain obedience to the occupation, the U.S. military deceptively argued that its savage invasion was humane. This counterinsurgent battle for hearts and minds was expressed by Joseph Pendleton, the U.S. navy commander in the Dominican Republic:

“‘Our work in this country is not one of invasion…[but to]…restore and preserve peace and order, and to protect life and property…[and to]…inspire confidence among the people in the honesty of our intentions and the sincerity of our purpose.’

According to the U.S. Navy, “Pendleton gave expression to the principles…to which the Marines, with a few individual exceptions,…faithfully adhered.” These “few exceptions” were actually common crimes committed by marines. El Cable, a newspaper in Santo Domingo, documented three marine crimes within the span of just one week:

“A [drunk] U.S. Marine…wounded Ana Julia Peña with a bullet…The official version of this disgusting event stated that it was purely accidental. But accidental events like this – on purpose or due to drunkenness – occur too often here and anywhere else occupied by U.S. Marines.

Another murderous marine…punched a man…breaking two of his teeth and then knocking him down. The victim broke his neck against the pavement and died…

A Marine Assaults a Blind Man: …a drunken marine…carried out a brutal and unfair assault against a blind man named Guzman Perez…the marine beat up a child…and…began to hit [Guzman] who became a scapegoat of his savage fury…”

Even the U.S. navy cited marine criminal activity: “officers and enlisted men extorted money and goods from natives, made arbitrary arrests, assaulted civilians…and misappropriated government supplies.” The navy humanizes the criminal marines by blaming boredom, isolation, and minimal supervision as reasons why they “fell victim” to “temptations.” However, these “temptations” were actually a systematic reflection of the entire criminal occupation.

In response to the U.S. occupation, campesinos and caudillos (most notably Desiderio Arias, a supporter of ex-Dominican president Juan Jimenes who resigned in protest when U.S. marines invaded), united to form the eastern-based gavilleros, a group of “rural outlaws” which led a guerilla war against U.S. colonization. The only laws gavilleros broke, however, were those imposed by the U.S.

Gavilleros attacked both U.S. military and sugar mills, or ingenios. Ingenio employees pleaded the U.S. for “protection to American people and…property against the revolutionists”. When gavillero Vicente Evangelista killed three U.S. sugar engineers in La Romana, he was executed in 1917. Los gavilleros continued fighting until the U.S. marines, unable to defeat them militarily, negotiated their conditional surrender in 1922.

The United States, already in military and political control, aimed to complete the trinity of supremacy by conquering the Dominican Republic’s main economic engine: sugar. When Christopher Killumbus landed in Ayiti/Quisqueya in 1492, he brought the first sugar cane to be harvested in the Americas. Sugar soon sparked a European white gold rush that claimed lives and territories for centuries. During the 1800s, wars ravaged three major sugar exporters: Haiti (independence from France), the U.S. (Civil War), and Cuba (Ten Year War against Spain, famously co-led by Dominican Máximo Gómez). As global sugar supply fell, the white gold rush invaded the Dominican Republic.

By 1900, sugar was the world’s hottest commodity and the Dominican Republic’s most lucrative export product. The Dominican ingenios were primarily managed by White Dominican criollos, Cuban planters, European investors, and U.S. companies (most notably the South Porto Rico Sugar Company). Yet, most lands in the Dominican east were non-registered, collectively-owned terrenos comuneros.

This communal setup was chaotic only to foreign capitalists who preferred a catalogued system of private property. To systemize land ownership, the U.S. intervened with lawyers, soldiers, and Ivy league academics to create the 1920 Ley de Registro de Tierras. The colonial Land Registration Law divided terrenos comuneros, displaced campesinos without “proper” land titles, and legalized those claimed by U.S. companies. It was a timely law: sugar production in the Dominican Republic had grown 79% since 1914. 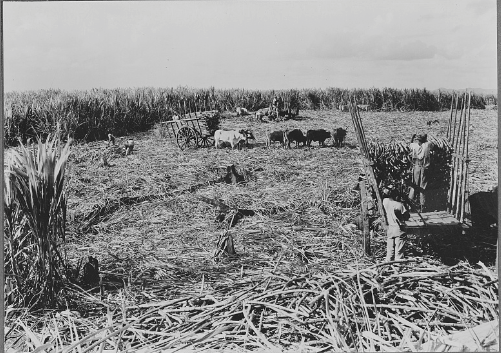 This growth is attributed to the U.S. military, which helped sugar companies steal land. The South Porto Rico Sugar Company, the country’s second largest sugar producer, would approach a land owner and make, “an offer to the owner, which if rejected…is told that his title is worthless, and that if he does not

transfer his land, their private police…throws him out of his own property.” Some evictions were executed through arson. Dominican newspaper Listín Diario reported in 1921:

“…a tongue of fire burned the houses, and the violent spectacle of the uprooting was heartrending… children, women and old men, fleeing swiftly with their shoulders bent by a heavy load, not knowing where to go. They, who are the true owners of the land…have no shelter, living under the trees in the public roads.”

A U.S.-based author noted, “By a combination of outright purchase, cajolery, tricks, threats, violence and legal maneuvers, the sugar companies easily wrestled homesites, farms and grazing land from their former holders or owners, leaving them landless and destitute.”

Resistance efforts by gavilleros and Dominican nationalist leaders, as well as communists and Cacos guerilla fighters in Haiti, likely influenced U.S. presidents Wilson and Warren Harding to withdraw from the island. U.S. withdrawal culminated in the suspicious 1922 Peynado-Hughes Agreement, negotiated by Dominican lawyer Francisco Peynado, who represented almost all U.S. businesses in the Dominican Republic. Originally opposed by Dominican nationalists who demanded an unconditional withdrawal, “pura y simple,” the Peynado-Hughes Agreement offered U.S. withdrawal (which occurred on September 18th, 1924), and an end to future intervention, on the condition that the newly formed counterinsurgent Guardia Nacional remained under U.S. control.

The U.S. withdrew its military from the Dominican Republic only when it ensured a stable sugar monopoly. By 1925, half the sugar ingenios (11 of 21) were U.S. owned, and 98% of sugar exports went to the U.S. The marines also protected sugar interests in Haiti, such as the Haitian American Sugar Company. This simultaneous, bilateral sugar monopoly revealed that, although separated by a countryside border, the coastal borders of Haiti and the Dominican Republic were revolving doors through which U.S. imperialism determined the destiny of both countries.

During both colonial regimes, the U.S. controlled Haiti’s military and moved all of its gold to what is now CitiBank, while the Dominican Republic became a U.S. proxy government. Between 1916-1922, the U.S. installed seven military heads of the Dominican state, one which also simultaneously served as the military head of Haiti. The last Dominican president under U.S. colonization was Juan Bautista Vicini Burgos, a member of the wealthy sugar baron Italian-descended Vicini family.

By 1924, U.S. intervention became officially managed by Dominicans. The most notorious neocolonial leader was Rafael Trujillo, who joined the Guardia in 1918, served as police chief, and led a golpe de estado to become dictator in 1930.

This is a multi-part article in a series critically analyzing the history of independence in the Dominican Republic. The third part was published on July 5th, the date of the country’s rescheduled presidential elections and five months after municipal elections were fraudulently suspended on February 16, 2020.

Jay Espinosa Fabian is an Nuyo-Dominican writer and photographer. He was born and raised in the Bronx, New York to parents who immigrated from the Dominican Republic. Jay can be followed on Instagram @thejayespi.